This page discusses a few independent utility functions which don't belong elsewhere, and are too small to bother with a page on their own.

They came about because Camel handles a lot of external data, any of which may be badly formed. The glib api's are poor - it is too easy to write code that goes into infinite loops, or jumps off the end of strings. We also cannot enforce all-or-nothing; validating strings and throwing them away entirely if they are broken is both expensive and pointless, we want to be able to easily fail gracefully, or at least not crash.

So these functions were born to simplify UTF-8 string processing. No strict unicode validation is performed, only checks that the string obeys the basic encoding rules.

The get functions mimic the stdio fgets interface (or even more closely, the basic C, (c=*p++) 'interface'). A pointer to the current character position is provided, and the functions return 0 for the end of the string, or 0xFFFF for truncated strings for the limit function. The limit variant is used to scan binary or bounded data, and the normal version operates on c-strings. If a character is badly formed, it is simply dropped silently from the input, providing cheap and transparent string validation.

These functions are used in the same way you might use a C pointer to iterate a C string.

Then we have a simple string creation function. It will advance ptr to the next character position; you must have at least 4 bytes available at the current destination pointer point (Unicode Standard V3.0, section 3.8 - each UTF-8 sequence is a maximum of 4 octets).

A GString utility function - this should be namespaced to Camel, or may no longer be necessary, when it was written GString didn't have UTF8 calls or they couldn't be found at the time.

And also some helper functions for UCS2 conversion, which is used for interaction with Mozilla's NSS library (or was at one time).

This is very simple:

Note the equivalent glib calls for a similar piece of code:

If the string has not already been validated, it must be validated before passing it to these functions, otherwise the above loop could run off the end of the string.

But this effectively scans the string twice, and needs a more complex inner loop.

A few simple string utility functions, that work on mail data types; that is, not based on locale. Some pre-date the g_ascii functions, or are just conveience functions.

A case insensitive set of functions for using with a GHashTable. Hmm, the code looks somewhat questionable for the hash function.

A bad implementation of a strstrcase function; that ends up just calling the locale-specific strncasecmp anyway. Needs fixing.

This is something a bit more useful - it is a global reference-counted string table. Where there is the possibility that many strings may be duplicated (e.g. the To address of most e-mails), 'pstrings' may be used to store them. They are stored in a GHashTable, to ensure that each duplicate points to the same physical string, but the value stored in the table is the ref-count.

They will scan blocks of characters and determine which specific character set, if any, can be used to represent all of the characters present. If none is found, it falls back to UTF-8.

There is an iterator based function and a simple-string helper.

And another helper function which will convert an ISO character set name to it's corresponding Windows charset name.

This contains a handful of miscellaneous I/O related functions as well as some binary data file encoding and decoding functions.

A function exists to create a directory heirarchy in a single call.

And a function which will encode any non-filesystem-safe characters using URL encoding. This takes a file name, not a path.

Create a save filename for a two-stage commit write. This takes a path which will have '.#' prepended to the filename part of it.

And then we have interruptible but atomic read and write functions. They will listen to Evolution/Camel.Operation cancellation events on the current thread and return -1 and set errno to EINTR in the event of user cancellation. Any other signals received are ignored to ensure a full read or write.

The write function will guarantee to write all of the data or return -1 for an error.

These are used to write binary data files that if structured properly by the calling code should be relatively robust and compact. They are used for example to read and write the folder summary files, which contain information about every message in a folder.

There is a matching read and write function for each type - they must be used in strictly matching pairs, since each type may be encoded using different compression schemes.

Although these files have worked quite well over the years there is probably room for some improvement. One problem is that although a subsystem may version multiple levels of file or individual record, the versioning is strictly only for backward compatability. It would have been nice for data records to be sized, so that extra fields could just be appended to them without interfering with older versions.

This is an internal object used by the indexing engine to strip tags from HTML files, and also the MIME decoding process to detect character set tags inside of HTML content. It is a particularly simple but adequate pull-driven HTML parser which tracks tags and content, and decodes entities.

It shouldn't be used in client code though; it is too limited and not supported.

These are currently unused, but were part of the work intended to move away from depending on e-util when Camel was inside evolution.

There is a doubly-linked and singly-linked list implementation which has a consistent and comparable API, that can be used to implement type-safe lists, queues (fifo's), and stacks.

The double-linked list is based on Amiga's Exec list, the implementation originates from the public domain implementation in AmiWM. It has some particularly nice properties:

Each list node must contain a next and prev pointer. These would normally be type-specific pointers at the start of the structure to be stored in the list, rather than having any direct relation to CamelDListNode.

The list header itself consists of merging two separate empty HEAD and TAIL node pointers to overlap on the common NULL pointer. The structure must be initialised appropriately before use. 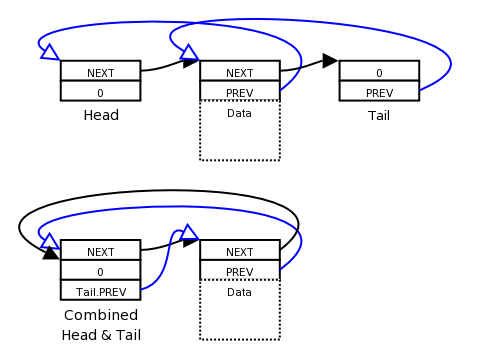 The diagram shows how the list header is built from merging a data-less HEAD and TAIL node. Instead of the code having to track the head and tail nodes separately (whether they are data-less or sentinal nodes), the combined HEAD/TAIL data is stored instead of the two pointers. Depending on how you see it, the overhead is either 1 pointer or you save three pointers for dummy tail/nodes.

Example: Adding to the list/queue/stack

In this example we will define a new node type MyNode which contains our actual data. Then we will loop, adding 100 list items to the end of the list. It is assumed that the list is properly initialised.

This example also shows that the next/prev pointers do not need to be initialised before use. Saving some processing time.

Now we walk the list of these items, removing any with an even size.

Another operation is to remove all of the items in a list. We could just walk the list and free the items as we go, and then reset the list node, or we could instead remove the items from either end of the list until there are none left. Although slightly less efficient, it has the advantage of the list always being in a consistent state, and is much more concise and readable.

This provides the same API, but for a single-linked list. Here no separate header is used, although internally the list head pointer is sometimes treated like a data-less node, to simplify the code.

Although the API is identical, the tradeoff is that by saving 2 pointers per list header and 1 pointer per node, only the addhead and remhead functions are O(1), all the others are O(n). The remove function also requires the list pointer.

Camel.NetUtils provides basic hostname lookup functions that simulate the getaddrinfo and getnameinfo interfaces if they are not available in the underlying operating system.

They are not merely just wrappers to these functions - in addition, they provide a thread-driven cancellable (using Evolution/Camel.Operation) name resolution interface, and return meaningful Evolution/Camel.Exception's if possible.

This replaces the older pre 2.0 code which tried to use gethostbyname and had a bit of a mess trying to implement IPv6 in a clean way.

This is an object used by the Evolution/Camel.MimeFilter#Camel.MimeFilterToHtml filter to scan for URL's inside of a text stream. It uses a trie as a pattern matching engine and calls callbacks when patterns are matched.

It should probably be considered an internal processor; it isn't documented in any useful way.

The camel certdb stuff was originally created because the NSS CertDB interfaces didn't appear to work as expected.

I'm not exactly sure why; they work fine for the S/MIME code. There are no comments to shed light on the matter.

So Camel.CertDB has basically just become a hashtable for storing certificates on disk and allowing the user to override whether or not a cert's failure for any reason should be overriden.

Don't use it in new code.

This isn't really a plugin; but its idea was to become a plugin at some point. Perhaps it should have been CamelJunkDriver. It is used by CamelFilterDriver to perform junk tests - at least it's interface is.

It should be a proper CamelObject; but it it just a structure.

The Evolution junk filter plugin, EMJunkPlugin creates one of these callback structures to implement pluggable junk testers, but it hides the details entirely from the plugin code.

Since this is another undocumented object that I didn't write, I wont document it here.

Locking is notoriously messy on Unix mail systems, often using incompatible locking, no locking at all, or the locking fails on the given filesystem.

To try to simplify this, in a not-entirely-successful way, Camel allows the compiler of the software to set what locking schemes are to be tried - and the code will then try all of them.

It provides 3 separate locking implementations, and if a given implementation has been compiled out, it will just NOOP and return success.

So unless you're building some specific locking system, you should just use camel_lock_folder, which will try all locking mechanisms. If any one of the locking mechanisms fails it will just ignore it. This seems like a bad idea, but without this, fcntl(2) locking failures over NFS will cause pointless failures. It will also clear stale 'dot' locks, and retry them if they are still active.

In addition to these standard locking mechanisms which are used for local mailbox folders, another special locking mechanism is used for locking system spool files. For this locking we use a combination of a helper process which runs with just enough priviledges to lock the spool file, and an API which invokes and manages the locking process - called camel-lock-helper. This only performs file-based 'dot' locking; it creates a 'mailbox.lock' file in the same directory as the 'mailbox' file, and keeps it refreshed while the client still requires it locked. It also cleans up stale locks automatically.

These functions have an alternative locking api. The first returns a lock identifier, and the second unlocks it.

The priviledges required are defined in the configure script and assigned by the Makefile. As a side-effect, installs as a user other than root may not install it with sufficient priviledges to check local spool mail.

Do we need to cover more about how camel-lock-helper works?