gitg is a Git Graphical User Interface (GUI) client written for GNOME. The program makes it easy for newcomers to visualize git actions and for expert users a usable interface to quickly perform routine operations such as commiting, rebase and so on. Internally, gitg it uses libgit2-glib library. Glib (pronounced 'gee-lib', are bindings for an externally managede C-based library called libgit2). The GUI is powered by GTK+ and keeping it all together is Vala.

From the Summer of Code 2013 Ideas page, I proposed to implement the following advanced operations of git as features for gitg:

These screenshots indicate the different parts of Gitg as referred to in this document. 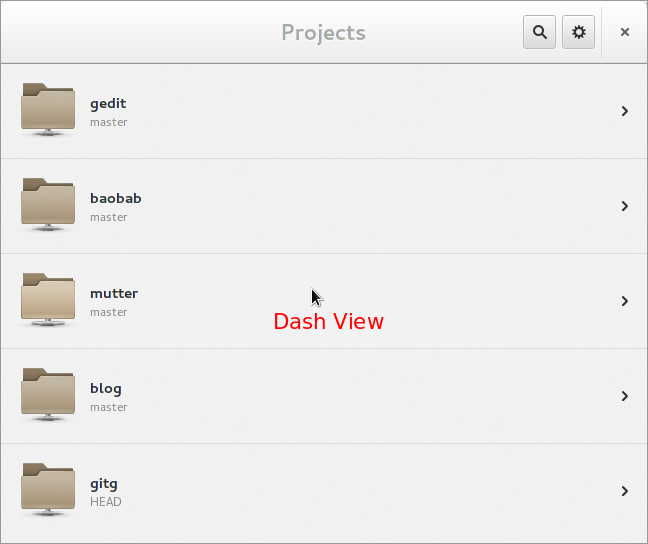 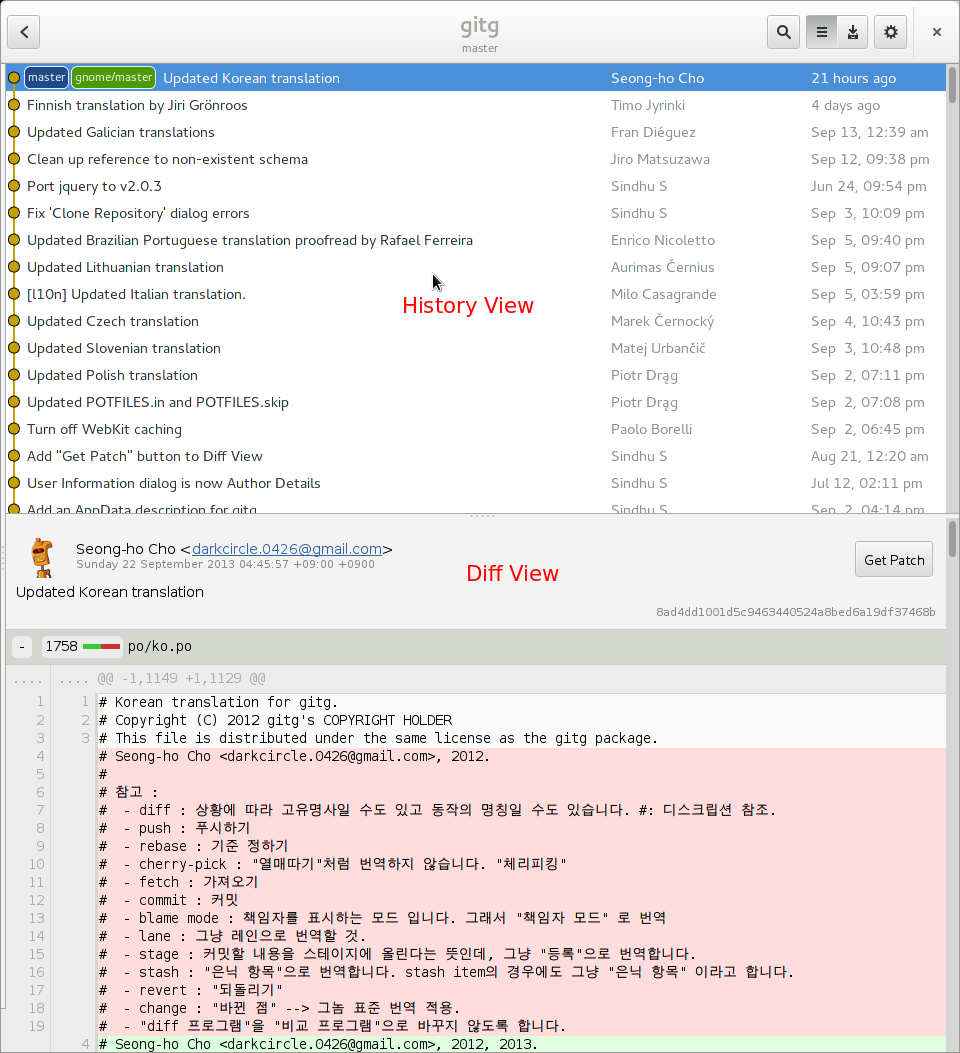 The git command to generate a patch file for a commit is git format-patch HEAD~N where N indicates the number of commits for which the user would like patch files to be generated. In keeping with this behaviour, I added a button in the Diff View. This work was committed to master in 8bcc579.

It was intuitive design to have a button that allowed a user to save the patch file for a selected commit meant that the design of the feature was simple, accomplishable in first half of the internship. gitg has History View which is constructed by the GTK+ widget TreeView. The widget that displays the diff of a commit is rendered by Webkit library. The unique technical detail of this patch is that the communication so far was one-way between History View to Diff View, the other way around was not done or explored previously. This was done by: 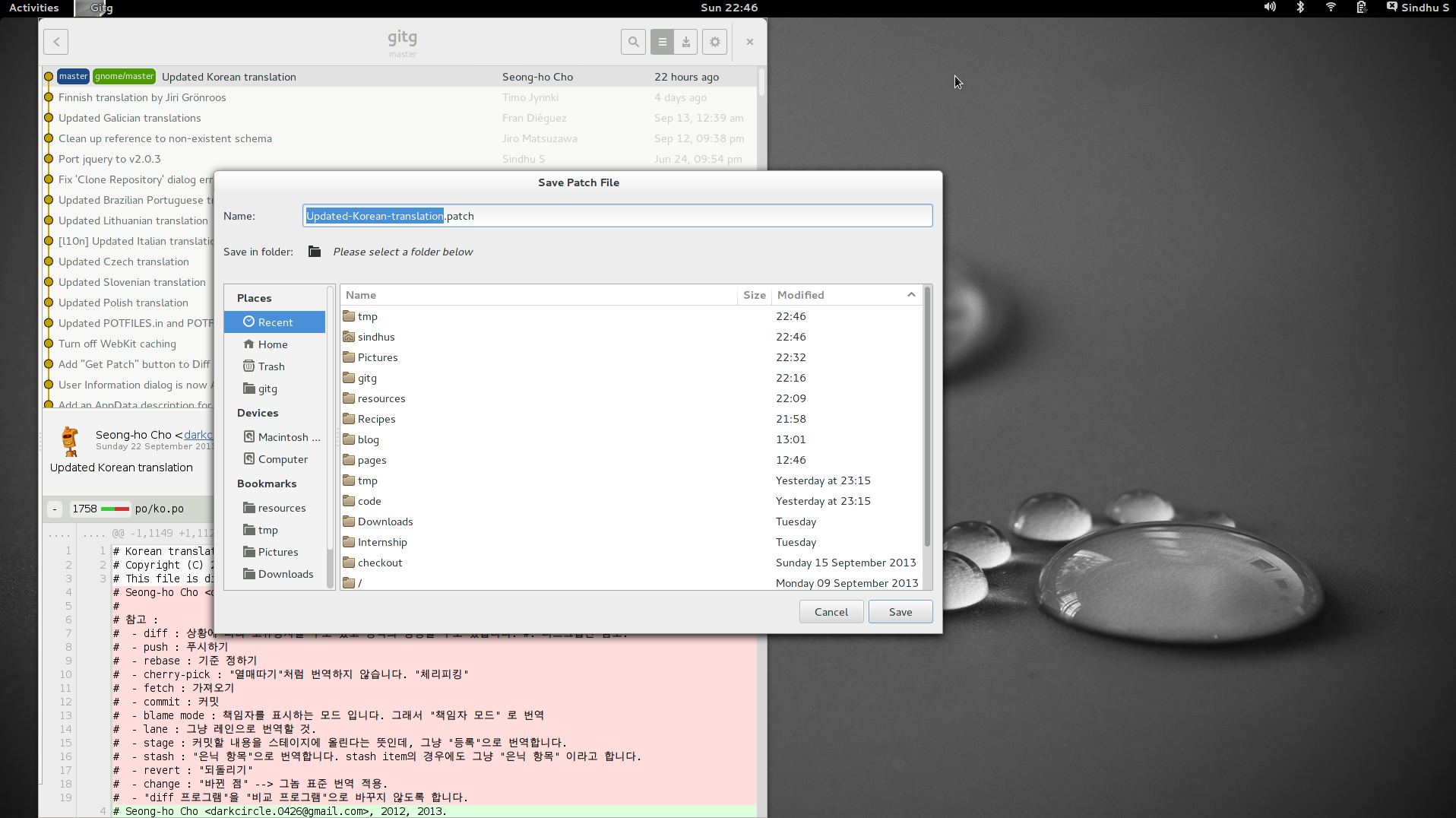 Git allows to rewrite git history. This is useful when one is trying to clean up the commit log to be replayed on top of another branch. Git interactive rebase behaves differently based on arguments passed to it. Here is a brief summary of arguments and the resultant behaviour:

What happens during an interactive rebase?

User is required to set an action against each commit line. To delete a commit, one has to simply remove the commit line entirely. User saves the file.

Very few existing FLOSS projects have implemented interactive rebase, qgrit is one such that uses QT and C++. The idea is to set the environment variables $GIT_SEQUENCE_EDITOR and $GIT_EDITOR to gitg in a special editor mode. qgrit helped me fine tune my ideas for the UI.

In order to keep my first iteration of this feature simple and to get the working prototype fast, I made the following decisions for what my interactive rebase feature can do:

Code is available at

The only cost that the interactive rebase feature has upon gitg is that gitg will now have to ship with 'git' as a dependency during installation.

A summary of how my work took shape 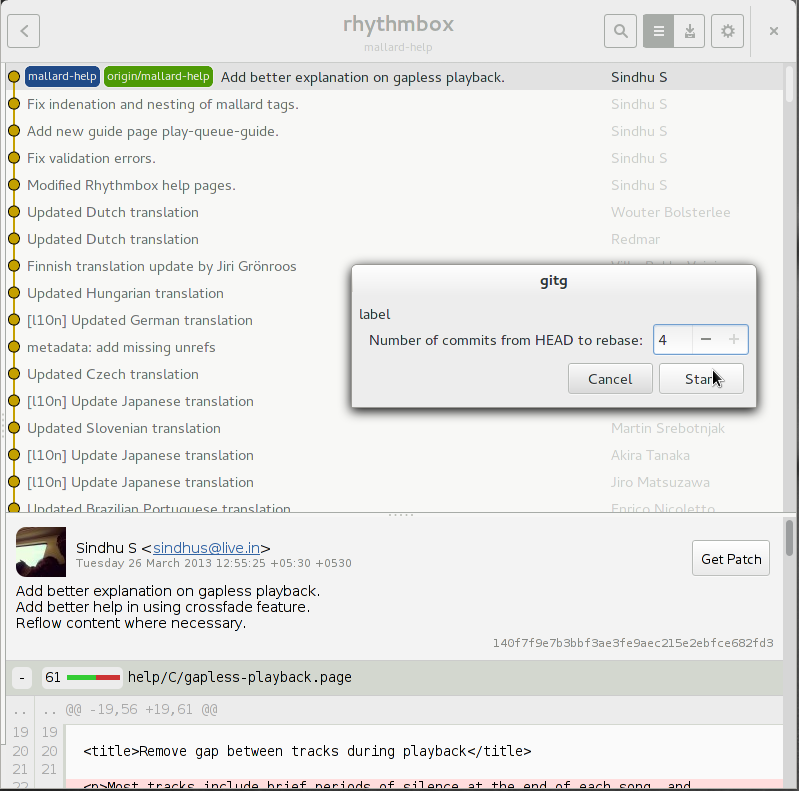 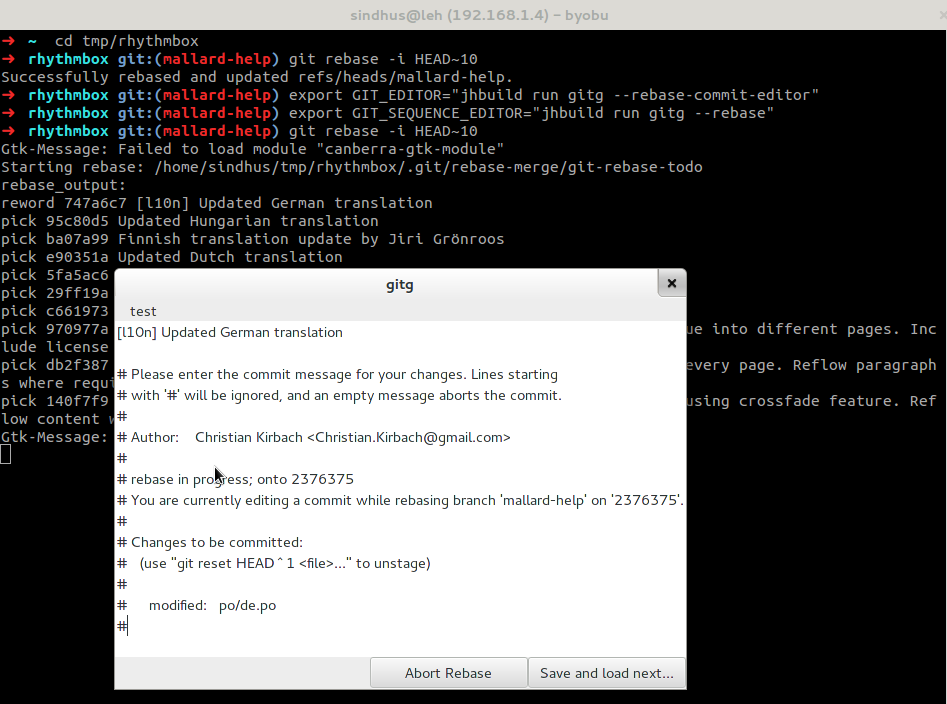 Throughout the iteration, I faced no major issues, a few routine syntax/logical errors, nothing I couldn't fix with a glance at code. The one that stopped in my tracks was a spawn related bug that was somewhat a Heisenbug. Am working on fixing this by making my --rebase and --rebase-commit-editor as independent helper binaries.

I have sporadically blogged and posted reports on mailing lists. I am not good with writing regular reports but my mentors were OK with keeping in touch about work happening via IRC.

There has not been a release since gitg was re-written in Vala. The developers planned that we'd make a release including the features resulted from the Summer of Code work. The interactive rebase feature needs some polishing to make the UI look like it's a part of Gitg, some code fix up, error catching and style clean up. I plan to work on it in small tangible results bearing sessions over the next month and hopefully working with my mentors be able to help them make a release sometime before November 2013.

This has been the very first time I ever did any serious coding. Both in my online and offline life I have received plenty of help from 3 key people: In order to explore different parts of gitg I worked on these other features/bugs and took on random tasks from mentors as well both pre and during SoC. Here's a git shortlog of the code that I've contributed to master:

WIP: Dash View and others

I also started working on revamping the Dash View, starting with adding useful subtext to each item on the recent list of the Dash View. The work-in-progress branch is available at: https://github.com/sindhus/gitg/commits/wip/sindhus/branch-info. This branch will see code for enhancements requests such as: