GNOME Internet Radio Locator 12 for GNOME 41 is a Free Software program that allows you to easily locate Free Internet Radio stations by broadcasters on the Internet with the help of map and text search.

GNOME Internet Radio Locator 12 for GNOME 41 is developed on the GNOME 41 desktop platform with GNOME Maps, GeoClue, libchamplain and geocode-lib and it requires at least GTK+ 3.0 and GStreamer 1.0 for audio playback.

You can either zoom/click on the map marker popups to listen to a station or enter city names in the GUI search input field in order to locate radio stations in the city using the text search with auto-completion. 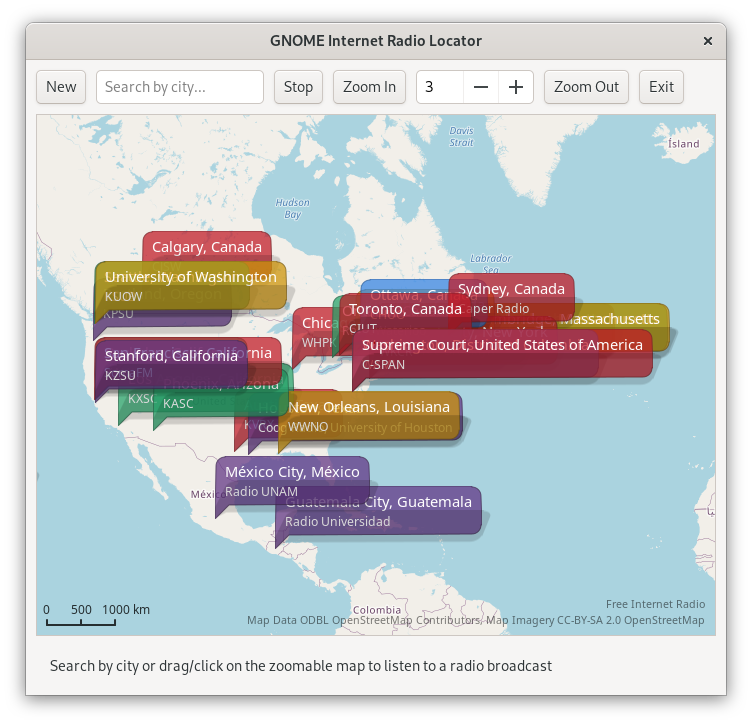 Version 0.1.0 was presented after a visit to SIPB at Massachusetts Institute of Technology, Cambridge, MA in 2014.

Work on the second rewrite began in March 2017 after a visit to University of California Berkeley, CA in 2015.

Version 1.0.0 was presented on GUADEC 2017 at Manchester Metropolitan University, Greater Manchester, UK in 2017.

Work on the map markers began at Oslo Metropolitan University, Norway in 2018.

Version 11.10 was released on June 17, 2021 with GeoClue Location view of your current location.

Version 11.11 was released on June 21, 2021 with GeoClue Location privacy support under Location settings.

Version 12.0.2 was released on August 31, 2021 with the radiOrakel feminist radio station in Oslo, Norway.

Version 12.0.4 was released on September 27, 2021 with updated Hungarian, Dutch, Occitan and Serbian translations.

The graphical user interface is translated into 25 languages so far.