Magnification is an adaptive technology used primarily by persons with poor vision. It is currently offered through GnomeMag. GnomeMag is a CORBA service that any desktop application can call upon to magnify and otherwise enhance the desktop. CORBA is being deprecated in favour of D-Bus. There are two ways to proceed to insure that magnification remains available. One of these is to replace the current CORBA-based GnomeMag with a D-Bus version.

Another promising approach is to build magnifier functionality into GNOME Shell. This has some advantages:

This page is about a magnifier for the GNOME desktop built into GNOME Shell.

The following sections outline what the GNOME Shell Magnifier does now, and where it's headed. The latest version of GNOME Shell (2.31.2 as of this writing) includes the magnifier functionality as documented below.

The following table lists the features described in the previous sections in terms of which version of GNOME they ship with. The "Functionality" column relates to what is implemented in GNOME Shell, "Settings" refers to the GSettings data that support the functionality, and "Preferences UI" to the dialog(s) that allow users to change those settings.

There are two videos showing the features of the magnifier. The videos are in ogg format (extension ".ogv").

There are a couple of approaches to provide a GUI that allows users access to the magnifier's preferences (GSettings). They fall into two categories: a zoom options dialog for general use that is part of GNOME's Universal Access Panel, and a tool for testing and demonstrating the GNOME Shell Magnifier.

The zoom options dialog for the Universal Access Panel (part of the GNOME Control Center project), has been merged into that project. A screen shot of the dialog is shown in Figure one, below.

The purposes of this version of the UI is to test and/or demonstrate the GNOME Shell magnifier. There is a low-priority effort to provide a standalone tarball of this dialog for those who want to try it out. The work was tracked at bug 622414 in bugzilla, but that has stopped. Figure two is a screen shot. 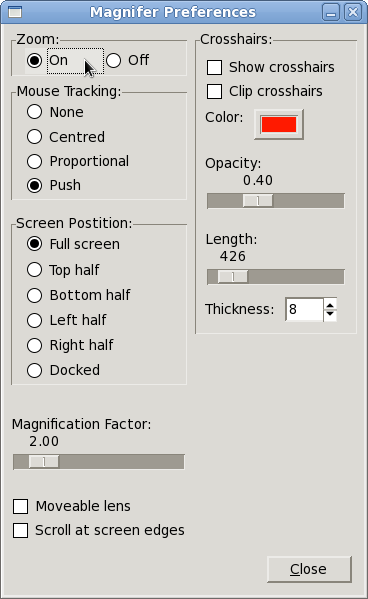 Changing the state of the the widgets in this dialog changes the GSettings values listed above, and they are immediately reflected in the magnifier itself.

Note that the preferences, GSettings, and behaviour are exactly the same in the two versions of the preferences dialog. One dialog is aimed more at testing; the other at end users.

This communication path is two way. For example, if the user changes the magnification factor with a key stroke, the associated GSetting value is updated from within the magnifier itself. An out-of-process application could be notified of the change, or react appropriately to the change.

Which magnification settings are persistent user preferences, and which are features that a service provides has been under discussion for some time. The issue was addressed at the AEGIS Seville GNOME Hackfest in Oct, 2010. The outcome is documented on the Common Magnifier Framework page.

The magnifier is published as a D-Bus service, named "org.gnome.Magnifier". As noted in the Common Magnifier Framework age, the implementation will ultimately match that defined by gnome-mag. But, at present, the GNOME Shell magnifier supports only a subset thereof, listed below:

GNOME Shell Magnifier is part of the ÆGIS (Ontario) Project. It is funded and supported by the Ontario Ministry of Economic Development and Innovation and the ÆGIS (Europe) Project.