Thunderbolt 3 is an upcoming I/O technology that will likely take over as the preferred method of attaching various external devices such as displays, storage devices and others. Unlike USB, TB allows wide access to devices or memory for example. It is speculated that a malicious device could be attached to a PC and copy memory or inject malicious spyware. This has been successfully achieved in the past, over a similar I/O port, Firewire.

Similar to a firewall approach, it would be undesirable to treat every device as potentially harmful in a general case. It renders a machine broken by default. The "do you allow new TB device?" authorization model that is used on Windows offloads the responsibility to authorize a device to the user who might not have experience and enough context to make such decision. It will simply create a hurdle that users will habituate to skip through. An "unbreak my computer" dialog.

Asking a generic "Do you trust Foobar Inc. Device?" is a simple transfer of responsibility/blame to the user. It doesn't provide specifics of what the device is trying to do. To authorize a device, it should be known what the device is about to do. Rather than asking yes/no authorization questions, specific action by the user could be requested instead. When plugging in a projector, the system could present the display settings panel in presentation mode, requiring explicit enabling of the detected projector. See https://wiki.gnome.org/Design/SystemSettings/Displays

Unless we can prevent the projector to also access system memory or storage devices, a broad device blocking and user driven whitelisting will not be effective against the attack described above.

The Thunderbolt technology does allow to be used in three modes, limiting the access scope. The primary mode is the native TB3 with the direct access to everything (and highest achievable transfer speeds). In addition the technology is able to operate in USB 2 and 3 mode and Display Port mode. Additionally a DP + USB mode is possible.

It is possible to define a security policy for TB devices at BIOS level. When any attached TB device gets recognized the mode is referred to as 'NONE'. 'DP only' is a security mode where only display port devices (displays and projectors) get recognized. 'USER' is a mode when unknown devices need to be authorized by the user and thier UUID is stored to be used next time without explicit authorization. 'SECURE' is the strictest model where in addition to device identity their authenticity is checked using crypto hashing.

All the use cases below assume systems are configured to run in the SECURE mode.

Activating Thunderbolt can take up to 10 seconds. While it would be desirable to speed up the discovery and security handshake, it's necessary to provide feedback to the user that the hardware is in an intermediate state, similar to connecting to wifi network. 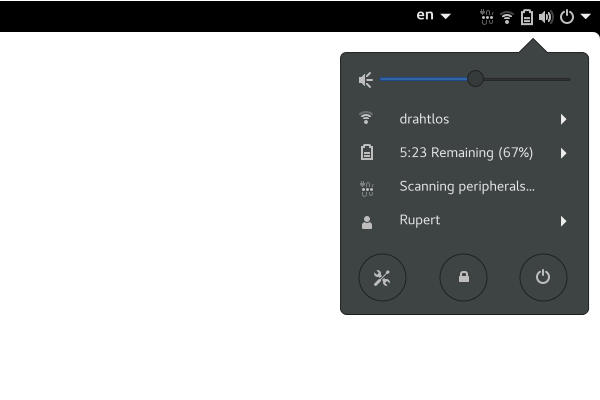 A typical home user running distributions such as Fedora or Ubuntu. 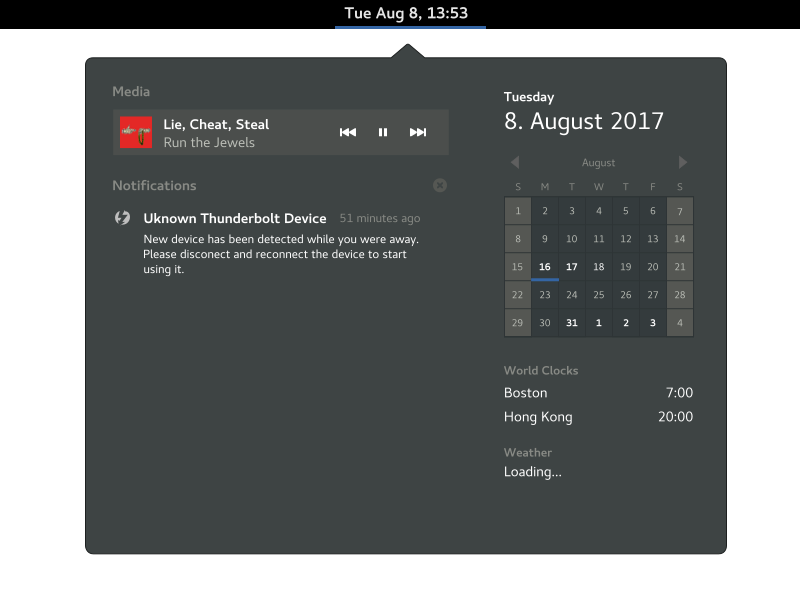 When a user is not an administrator, a typical situation for corporate environments, new devices are not automatically athorized to be used. Instead a notification is triggered to take you the settings panel is opened to allow to authenticate as a system administrator and explicitly authorize a device. However in corporate environment, it's more likely to be done remotely using the *boltctl* utility. 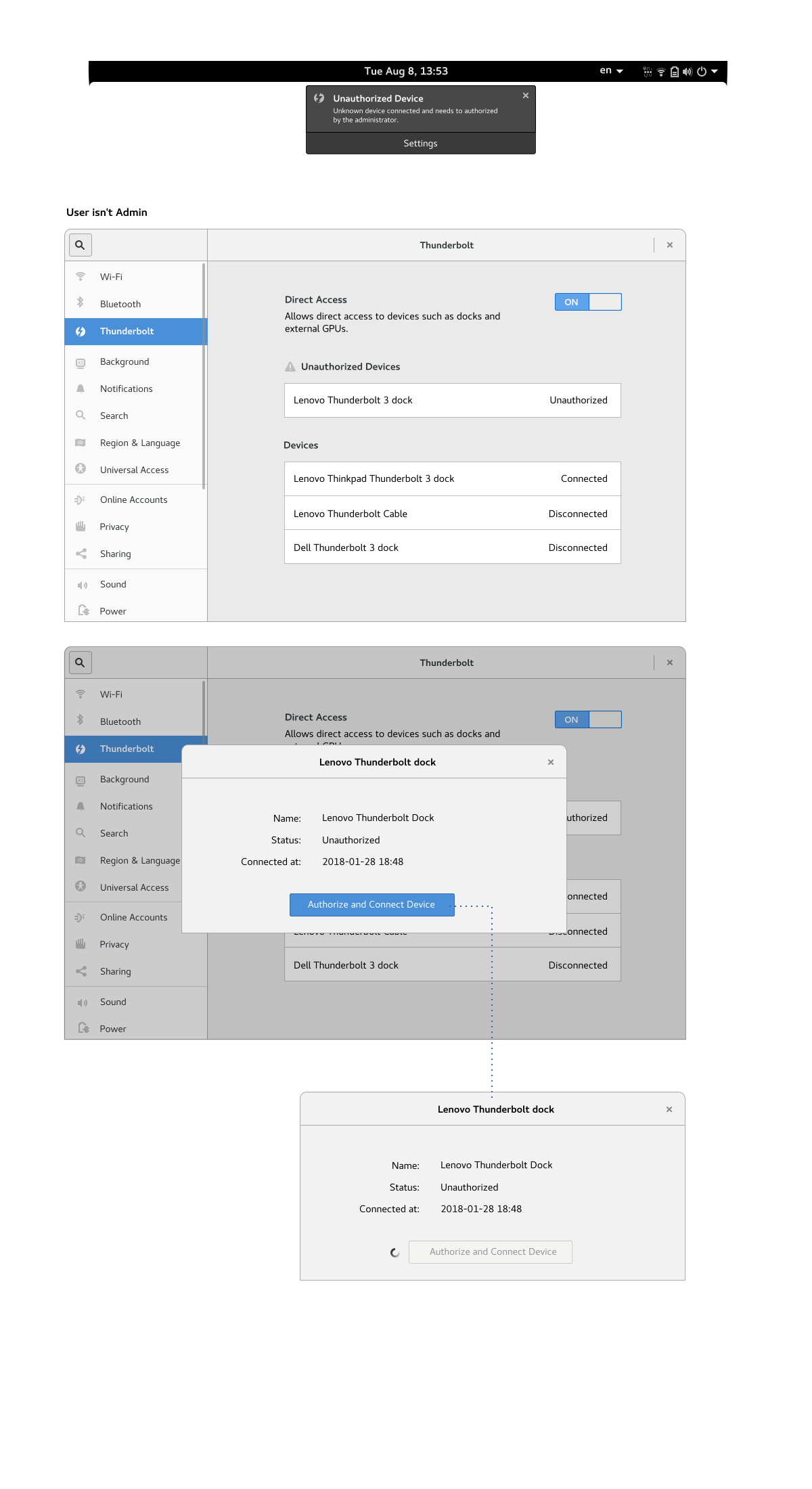 To lower the risk of malicious devices when traveling, the TB3 could switch to a less capable but safer DisplayPort/USB mode. I would personally refrain from exposing the BIOS security modes described above. Instead a full/restricted access setting can address the 'paranoid traveller' use case. 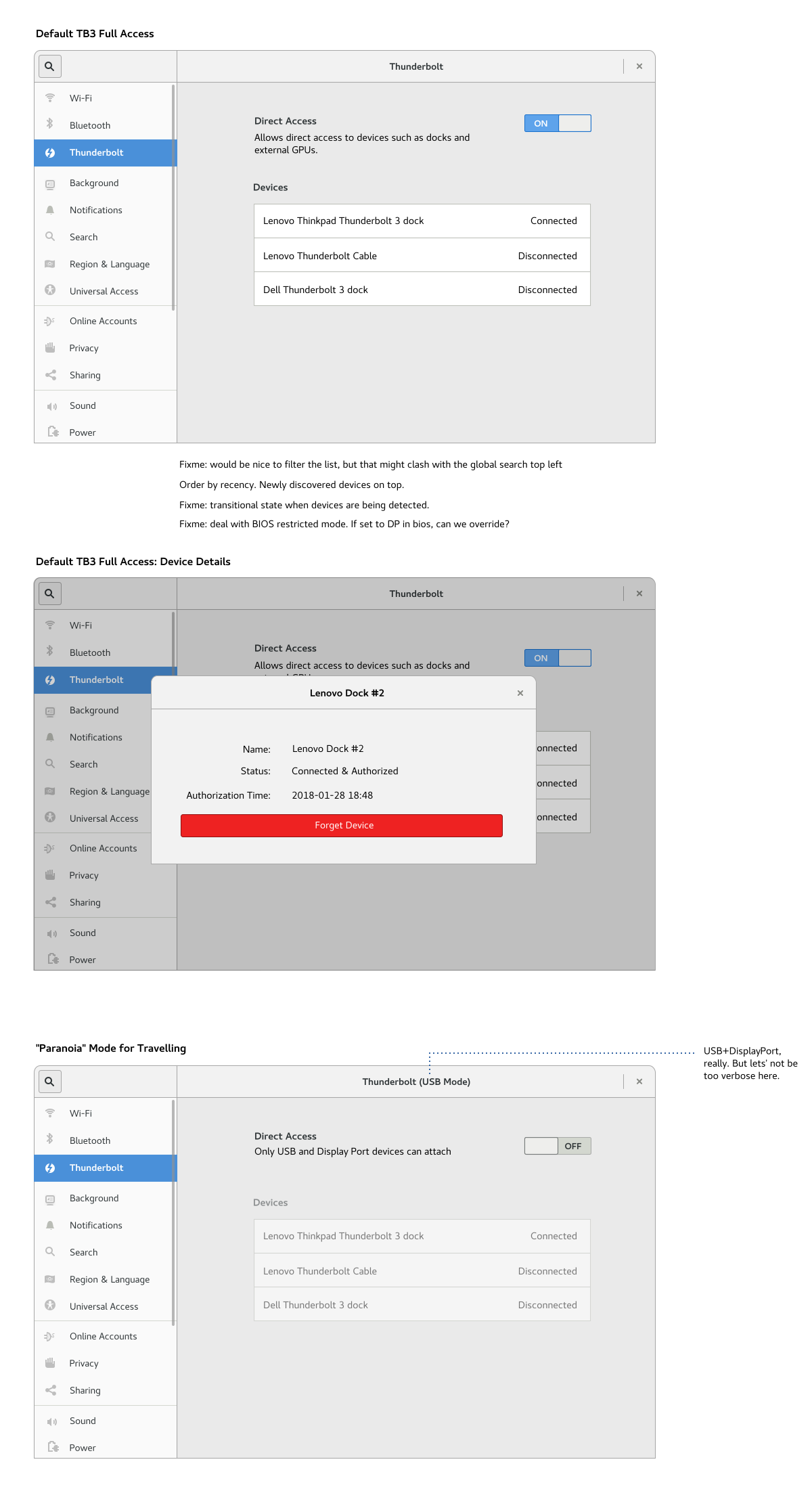 While I would generally recommend not exposing things to configure when hardware is not present, we currently show an empty state for a system with no Bluetooth controller, so we should remain consistent with that behavior. Apart from TB3 missing completely, the user may have chosed to set disable the direct access in the BIOS in which case the empty state can communicate the situation and provide a link to the documentation explaining the USB/DP fallback BIOS settings. 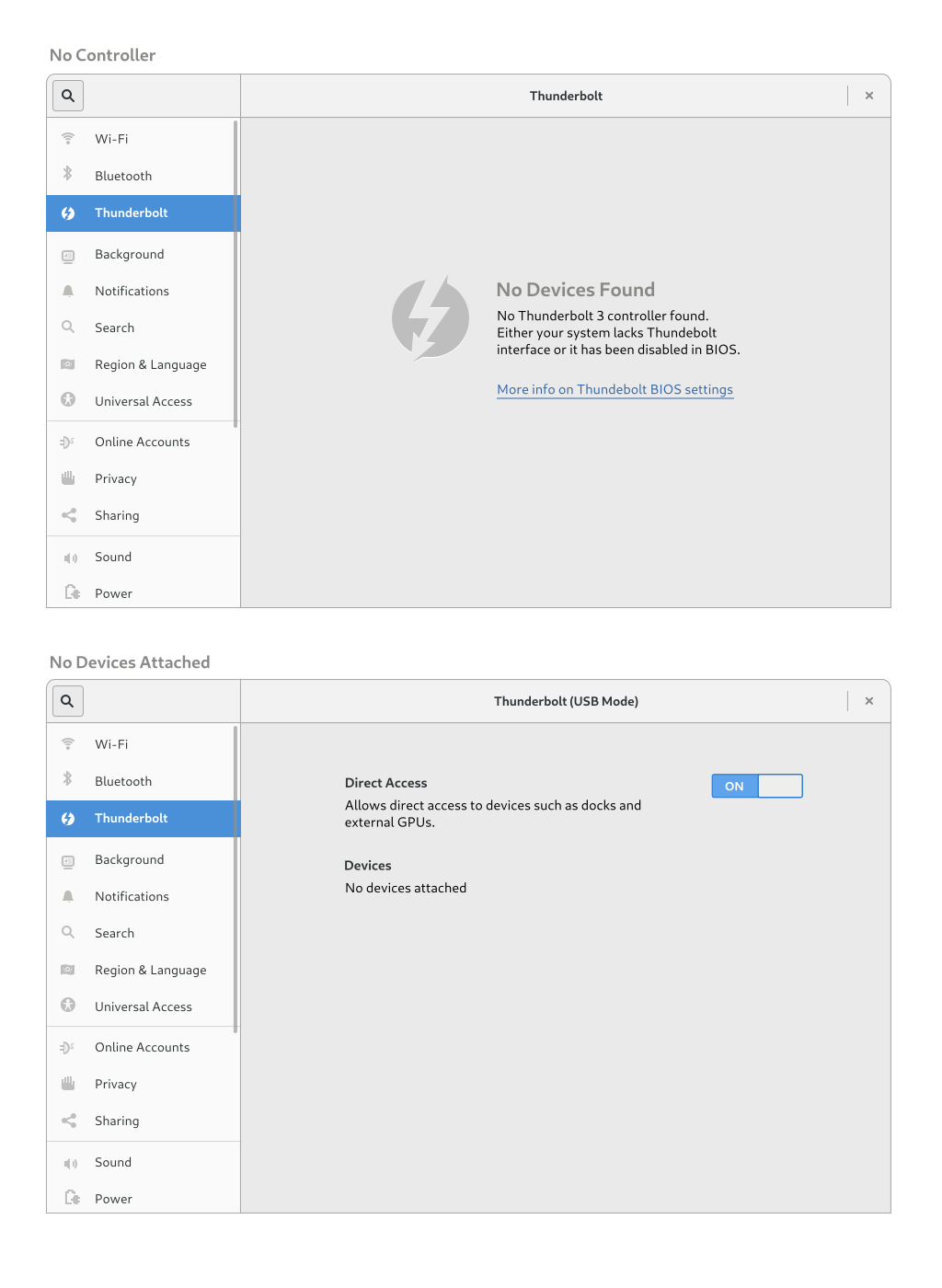