Traditional menu bars are being removed or replaced in some application designs, including single menu buttons of various descriptions. Let's use this page to discuss and develop design patterns for alternatives.

The design of menus for three GNOME applications feature here: Nautilus, Eye of GNOME, and Epiphany.

A single button that activates a menu.

What is the best place to position these? They would need to be consistent across applications.

What should the button look like? They probably need to be an icon with a disclosure triangle. 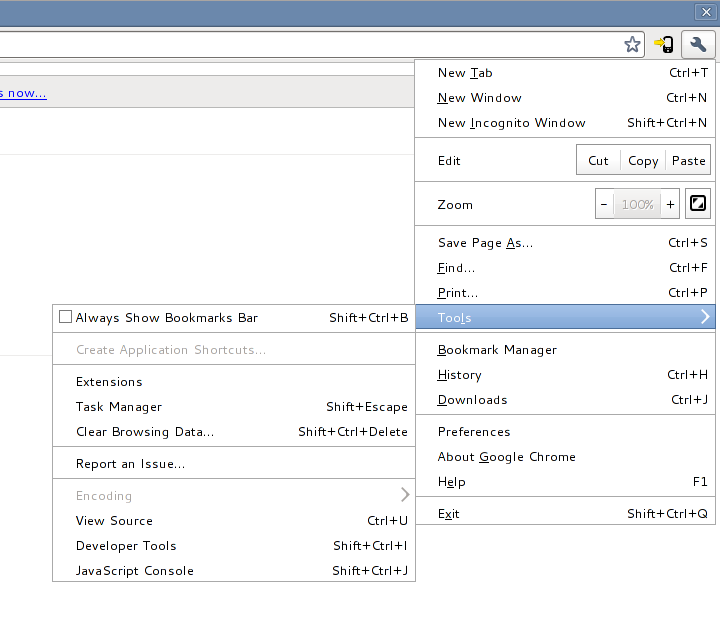 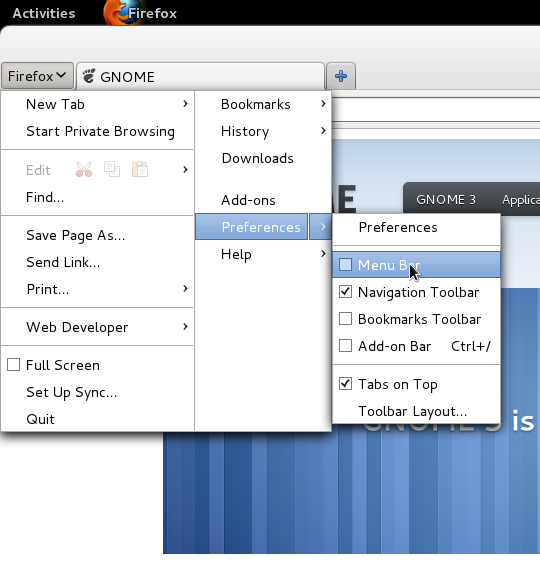 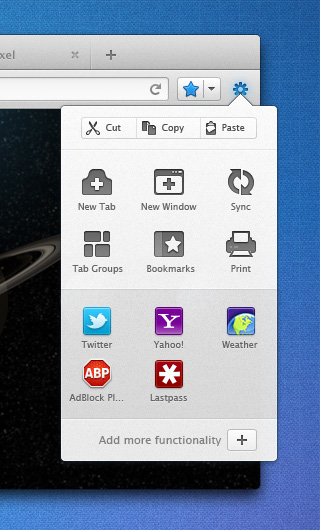 Some notes about the design of this one:

Issues to be considered in relation to the design of menu bar alternatives.

Menus provide a way to view the various keyboard shortcuts used by an application. It would be nice to replace this with something that is more effective.

Menus at the bottom of a window has a problem of habituation. The menus will open upwards if the window is too close to the screen edge and open downwards otherwise. Putting the menu on the top avoids this problem.

I think menus are a very important part of design for GNOME to look at. I really like the mockup with the gear icon just like Google Chrome, and would love to see Chrome-like menus as a standard part of GNOME apps. However, I don't like the cheat-sheet idea, as it is more natural to discover the keyboard shortcuts within the menu. Few users will want to read a whole list, and even fewer will actually remember the shortcuts.

The single icon menus do not work at all for me, I find it extremely difficult to figure out what the various icons mean. There is a reason I have the chosen both icons and text for the toolbar style. This new menu style is making it difficult and frustrating to use applications. Would it be possible to allow a user to set an option of using the older menu style or at least have both the icon and text for the menus?

The MegaMenu needs to be more explored because not only it removes the clutter within the applications, it also provides the bonus for being touchscreen friendly for the future. With the advent of popover, why not expanding the functionality. While the megamenu may only works for Gnome Shell, gracefully falling back to the traditional menu. I orginally posted on Fedora Desktop mailing list until I learned the existence of this wiki. - Luya Tshimbalanga

Another attempt at resolving the menu issue for Gnome Shell tentativelly called Hybrid Menu. It combines the best part of menus seen above. The concept is similar to fullscreen mode where menu will appears by clicking of application on top bar. The main menu will display either main elements from popover. - Luya Tshimbalanga

About the apps that are using the traditional titlebar-menubar scheme, we can treat it as a title-subtitle pair where the menus are shown as clickable subtitles. As a further modification, we can shrink the entire menubar to a hamburger button when the width of the window is too less. - Ajinkya Dahale