There are a variety of characters that cannot be inputted with the keyboard in the usual manner. We need a way to insert these characters that is convenient and easy to learn.

Entering a punctuation mark then a letter combines them. ' followed by a produces an á, for example.

These appear to be used quite commonly. You hold down the Alt key and enter a numeric code for specific characters. 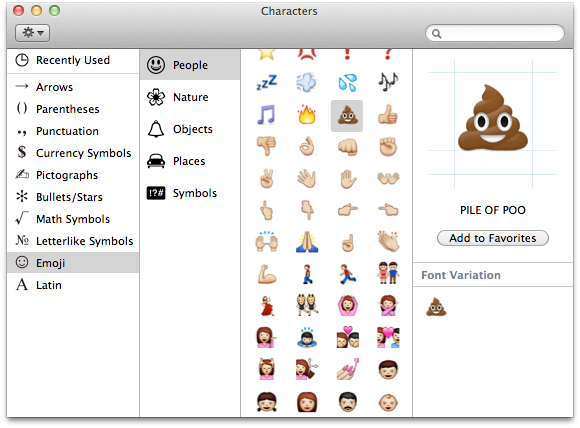 The bubble is activated by holding down the relevant key. Each character can then be inserted by pressing the corresponding number.

Similar to the 'Third Level Chooser' on Linux.

There are a number of ways to enter such characters, currently:

Find the character you are interested in, double-click to select it, then paste it where you need it. The downside of this is that you have to switch to another app and back for each character.

Included in GNOME 3.2 pops up secondary popups with choices for accented characters very similar to the one shown above when holding e.g. the 'a' button for a while. 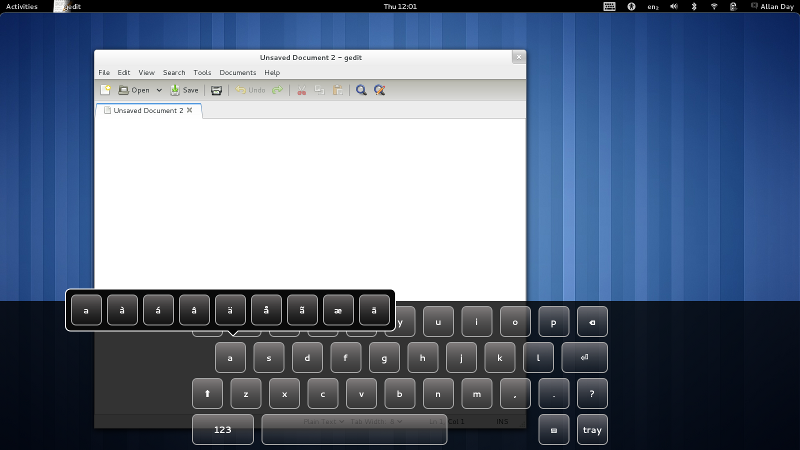 A simple input method that supports entering arbitrary unicode characters by typing Shift-Ctrl-u, followed by the hexadecimal Unicode codepoint. As an example, 'Shift-Ctrl-u a 9' generates a copyright sign. The downside of this is that you have to memorize all of Unicode.

This must be defined in the layout preferences. Then there are a large number of key combinations involving the compose key that generate such characters. As an example, 'Compose ( c' generates a copyright sign. This is supported both by GTK+'s simple input method as well as by various other input methods. The downside of this is that you have to memorize a large table of key combinations.

Must also be defined in the preferences. Holding down the key allows extra punctuation characters to be inserted.

This is automatically mapped to the Right Alt key. It operates in the same way as the existing Third Level Chooser implementation.

Similar to other unicode input methods, this allows characters to be inputted by using their unicode designation. 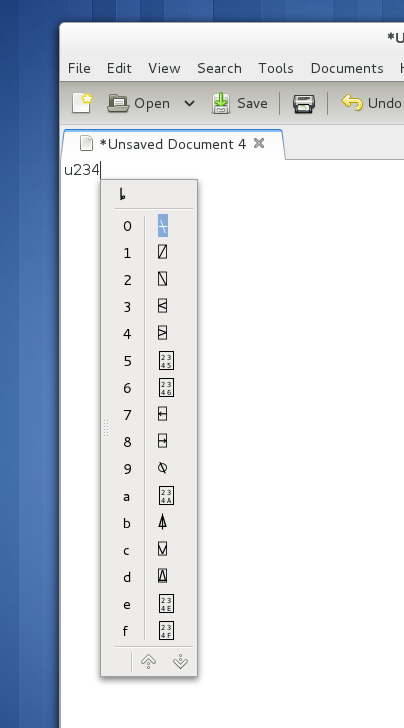 Reveals variants of that character, such as with accents and circumflexes

For common punctuation characters. This typically has a basic and extended set of characters

Keyboard input for extra characters is not particularly user friendly, but it should work nonetheless.

The characters that can be inputted using the third level chooser key are sometimes printed on keyboards themselves. They are also displayed in our keyboard layout viewer dialogs.

Pop ups such as those found in on screen keyboards and in OS X Lion offer an easy way to add extra characters. Consistency with onscreen keyboards found elsewhere aids their discoverability.

It is worth noting that these pop ups for character variations overlap with the functionality provided by the third level chooser key.

If we are going to have pop ups for inputting character variations it would be consistent to also use them for adding punctuation. The trick to this approach would be to find a good key to activate the character picker. Options:

The keyboard layout viewer needs to make it possible to learn how to use the third level chooser:

Popups for character variations are a good first step here. A method for adding punctuation could be implemented later.

We need a new design for this. See Design/Apps/CharacterMap