A nice simple app to show the time, date, and alarms. 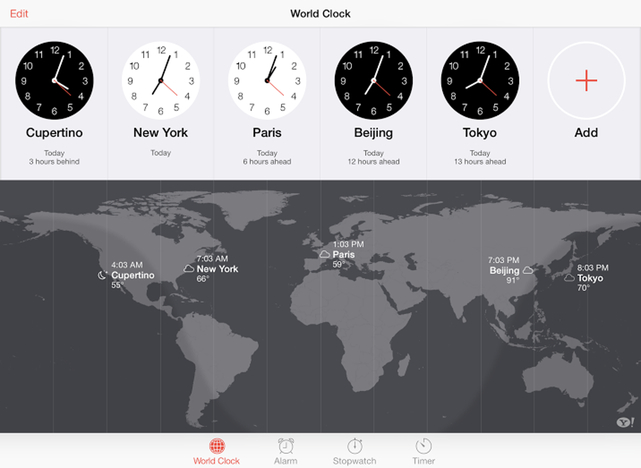 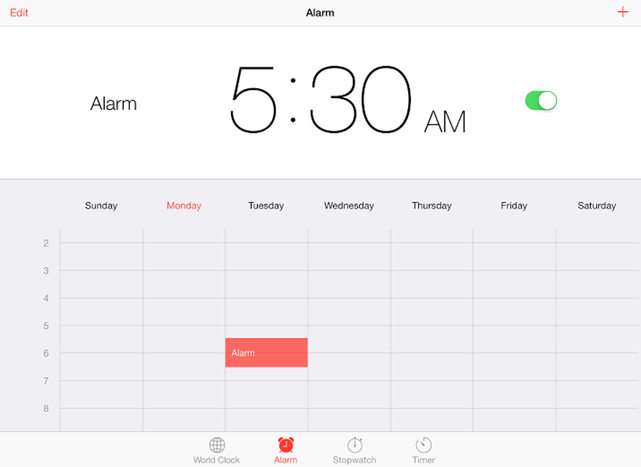 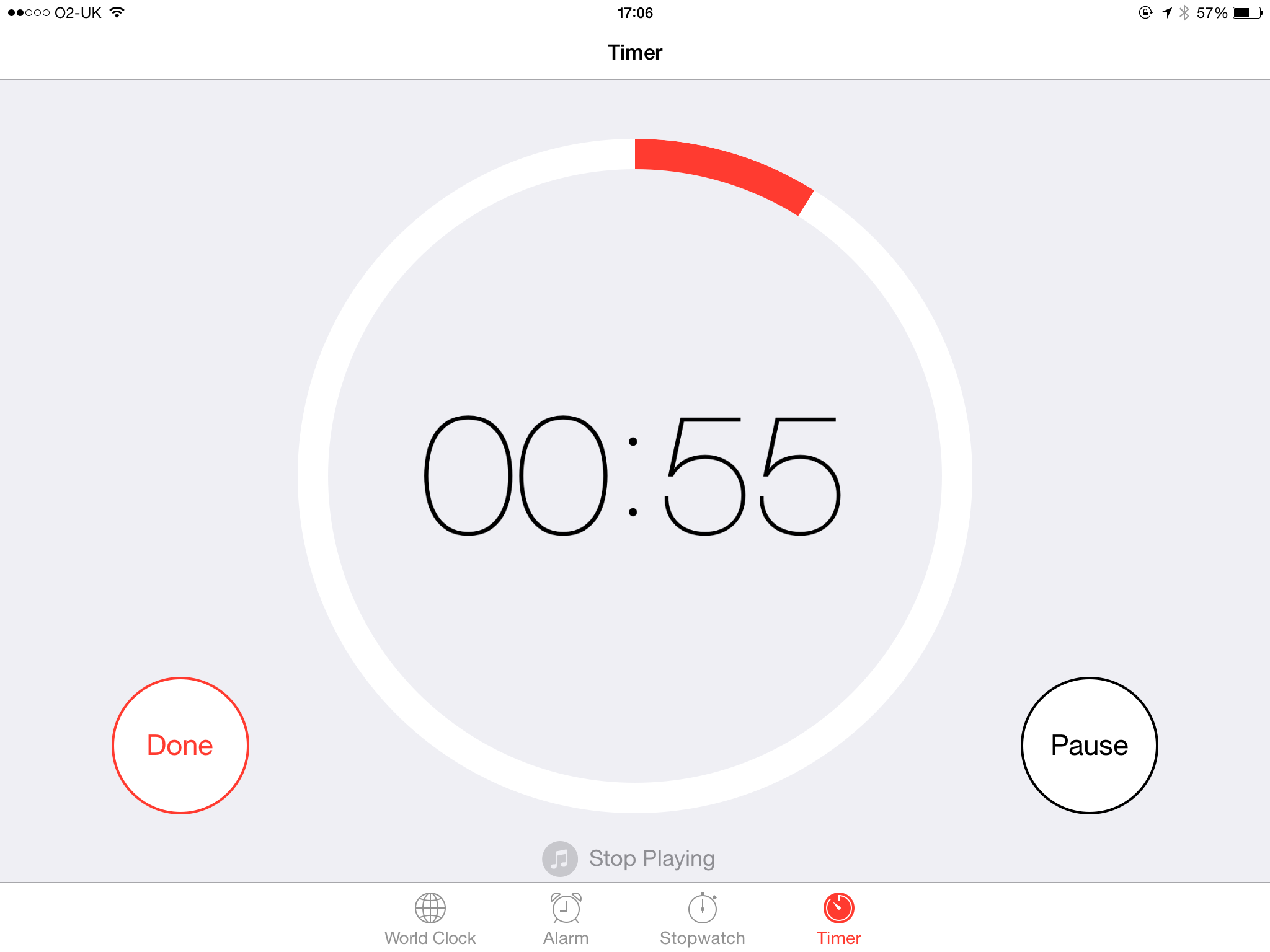 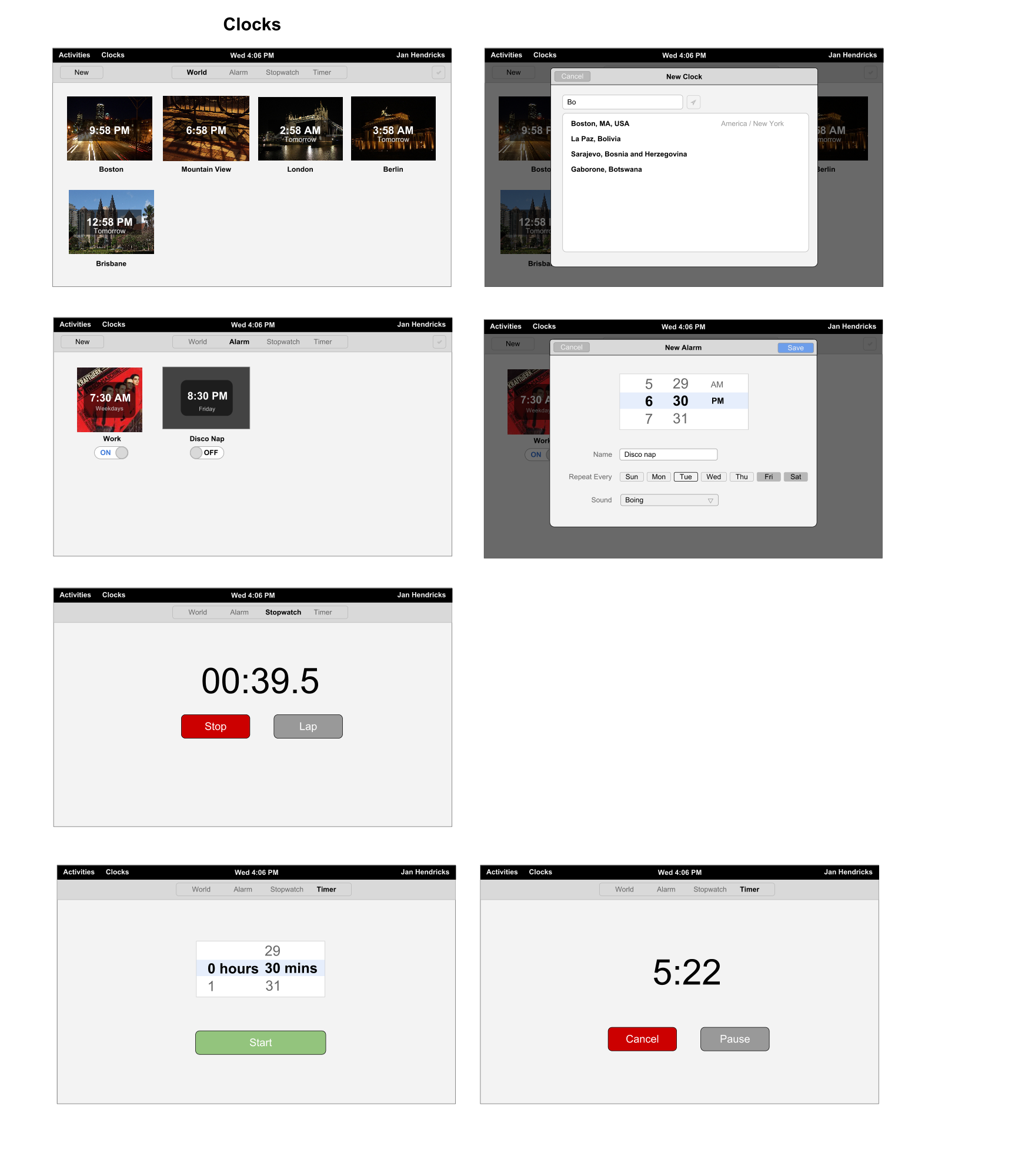 Suggestions for layout of the different application views (please treat any numbers as tentative and approximate):

Two mockups that mix clock and weather functionality. We could use a web view to allow for a more fancy presentation on the left side. I have been playing a bit with this idea; for instance, we could use a different background depending on the current weather. 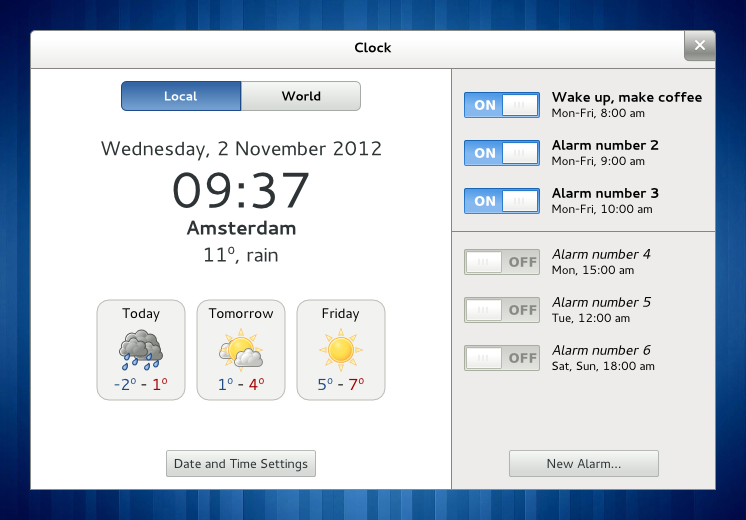 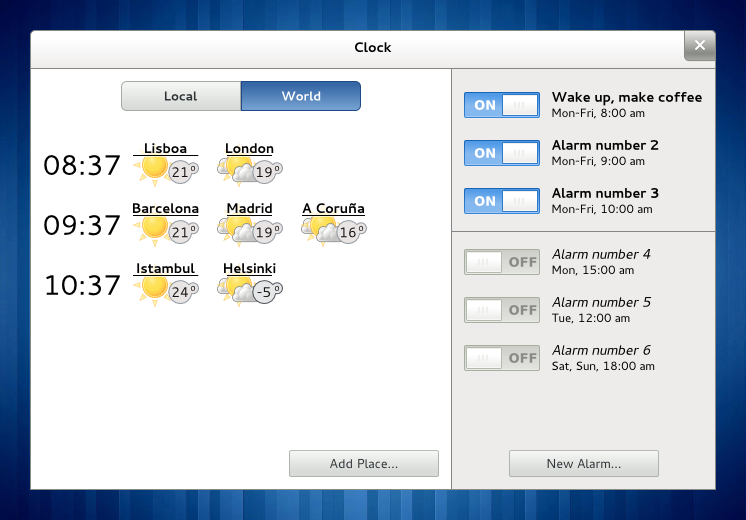 I'm really not sure that adding weather information to a clock tool is a good idea. For a few reasons. The first is that if I'm interested in weather the last place I'd go to look for it is a clock app. So, I think we're going to need a separate weather app in any case. Also, I think that weather information requires far too much detail to be be displayed in a clock app without sacrificing the primary goals of the clock app - display times and alarms. Also, for the world clock I don't think there is a particularly strong correlation with the places I want to know the time of and the places I want to know the weather of. For example, I want to know the time in Madrid because it is the same time zone as A Caruna but I don't want to know the weather in Madrid even if I am in A Caruna but certainly not when I'm at home. The same goes for knowing the time where colleagues like Jakub and Allan work. I need to know the times to be able to schedule things but I don't care about the weather at all.

I think that to do both time and weather justice and not compromise the primary goals for each they should be separate apps.

There is a use case where having both information together makes sense though. When I want to talk to people online (e.g. on IRC), I often check their place in the clock applet in 2.30 to see if it's too early or late to talk to them, and seeing what the weather is like there can be useful.

What do time and weather have in common? They are impersonal (apply to everybody on the same location), can not be changed (you can't speed up the clock or wish rain away) and are both basically natural phenomena.

This might be beside the point, but there is actually a great tradition of mixing displays for time and weather, as they were both related to observing changes in the sky. Astronomical clocks are not uncommon in European medieval buildings. Without needing to go that far back, you can find a very large amount of traditional wall clocks that include a barometer and a thermometer. Closer to us, the clock applet in GNOME2 also used to display the local weather

The main goal when doing those mockups was to provide a simple overview of time and weather, and grow from there by adding related features (alarms, other places). I tried to trim the information and keep it all in one view. There could be a debate between showing little information in one application and one view, or more information in two applications with several views each.

I agree that the case with showing time/weather in other places can be developed further. For instance, we could group those in the same country or timezone. Clicking on a place could show a dialog with its weather forecast.

In the case of having two different apps, would Clock and Weather keep separate lists of locations? Wouldn't Weather need to show the time in each of its locations anyway? What extra weather information would we show?

I started hacking the application upon request and I stumbled on the following issue. When creating a new Clock for the World Clocks, what kind of dialog should be used... I tried to be creative for now and just used something similar to the Date & Time Dialog... Another issue is the images used for each clock? Where do we get those? Why not just use Cairo Clocks?

Why not using a generic "city skyline" picture for clocks, and then slowly building a database of pictures? A bit the way i18n works.

The database could be online, and the image downloaded and cached locally when the Clock is added.

Great approachement, but will it feature waking up by "rtcwake" just before the alarm starts? I also thought about having a daemon, which is managing the rtcwakeups - because of multi user conflicts.

About knowing the time where colleagues works and/or any other sync related to working on different timezones, could be good to allow:

And, if it's not outside the scope of the application, could be great to have a way to calculate a given time (date+time+gmt, as in previous assignment) in your current timezone

More generaly, you may want to know what will be the hour in some places comparing to a given place-time. One should be able to pick up a place-time reference, and one or several others places (may they be virtual places like UTC). It would be nice if users woulb be allowed to select with several modus operandi like typing the name of a city/country or selecting a time zone on the world map. Also the time reference should be easily changeable (ex: a scroll bar) with a direct feedback of the relative hours in others places. This way if someone know where other people involved in the meeting, he can easily find what will be the less anoying choice for the majority. --~~~~