The main job of the bugsquad is to triage bugs in bugzilla. Triaging a bug involves:

The steps below should get you started triaging.

Once you feel comfortable with the bug triaging process, you may ask for extra bugzilla permissions so that you can make changes to bugzilla yourself. Details about this are in the /FrequentlyAskedQuestions.

Is that all? Don't you have any other guidance for a newbie like me?

Sure. If you would like to read more before you get started, you can read through the /FrequentlyAskedQuestions.

Take a look at the diagram: 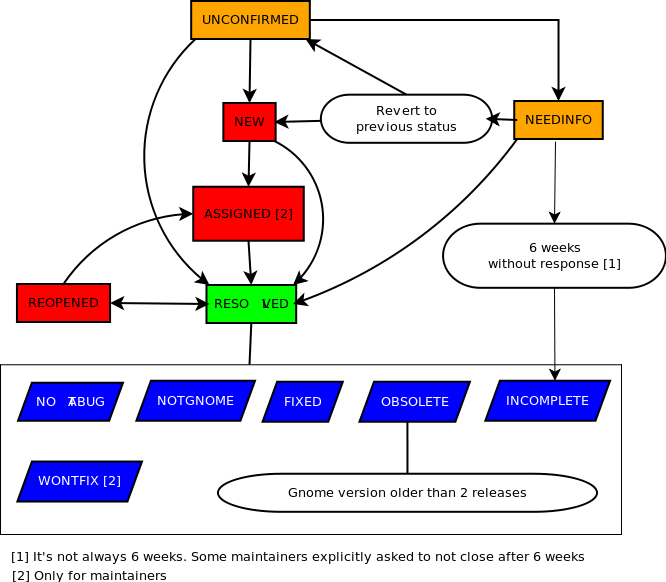 Some comments about status changes:

This guide should make triaging a bug as easy and simple as possible. Remember, if in doubt, ask! Also, remember that you may not be able to find anything to change for some bugs since not all bugs are filed incorrectly or incompletely.

Is it part of GNOME Bugzilla?

Some pieces of software that users think of as part of GNOME have their bug tracking systems elsewhere. See /NonGnome for a list of software tracked elsewhere for common non-GNOME products that we get reports for. If the bug relates to one of these components, please close the bug as NOTGNOME and ask the reporter to report it to the correct tracking system. Note that there is a stock response for this situation.

Does it make sense?

Does it have enough information? Common sense rules here - "this sucks" or "this crashed" should be moved to NEEDINFO with a polite message, as should other things that are too ambiguous to be useful. A stock response can be found here.

It is not appropriate for bug volunteers to close a report as RESOLVED WONTFIX - that is up to the maintainers.

The exception is crasher bugs that have a stack trace. See below for details; in general you should not mark a bug NEEDINFO if it's got a good stack trace.

If you mark a bug NEEDINFO, RESOLVED INCOMPLETE, or RESOLVED INVALID, it is useful to add yourself to the Cc field; if the reporter adds more information, you can then reopen the bug and retriage it.

If a bug report has been set to NEEDINFO state and if there has been no response for 3 months, feel free to close the report as RESOLVED INCOMPLETE by using the "incomplete" stock response.

Is the bug a duplicate?

Many bugs in bugzilla have been reported before. Finding them is more of an art than a science

There is a duplicate finding guide to help you find bugs that have been filed before (if you plan to search for duplicates of crasher reports, definitely take a look at that guide, as it will save you a lot of time!). This is an important step, but don't spend too long over it; if a bug is filed twice, someone else will mark the duplicate later.

You don't need to carry on triaging it if it's a duplicate; press the Save Changes button and go onto your next bug!

What version of GNOME?

Has it been touched within the last year?

If the bug is not an enhancement bug and hasn't seen any updates for a long time and is still UNCONFIRMED, it is likely that the version, the bug is filed against, will not see any updates. Set the bug to NEEDINFO and kindly ask the reporter with that stock response to reproduce with a more recent version. After 6 weeks, close the bug as RESOLVED OBSOLETE.

Is it in the right place?

If you think the bug was filed against the wrong product, look for a better alternative in the drop-down list box. Make sure to mark the "Reassign to owner of selected component" radio button in the "Change State or Resolution" box as well (forgetting to do this is a common mistake that results in the new owner not getting email about the bug).

Note that when you reassign bugs, bugzilla will ask you a few extra questions. More information about this can be found in the Bugsquad/BugzillaTipsAndTricks bugzilla tips and tricks .

What severity/priority should be set?

If you're unsure about your Severity/Priority triage, add a comment in the bug explaining why you triaged it as you did. You can also add yourself to the Cc field, so if someone retriages it differently you can find out why.

The product-specific triaging guidelines provide extra things that you can do for individual products.

By adding yourself to the cc list of bugs you change, you will receive emails with comments and changes others do to the individual report. You learn what further investigations others make and learn more rapidly about triaging bugs in bugzilla.

As of Bugzilla 2.20 there is a checkbox just below the comments input field where you can CC yourself to the report.

Encouragement from the Bugmaster

Remember that this is only the first step. At least a couple other people will read and have the opportunity to correct your mistakes. That isn't to say "make lots of mistakes" but it is to say "don't be afraid to make them." Especially once you get used to it, your work will make the lives of the GNOME developers- and as a result GNOME itself- a heck of a lot better. -- LuisVilla4

Many thanks to all contributors: