DanBallard: Windows XP has had user switching and multi user log on since 2001ish I think. It's really cool that we are getting there but putting the menu option for it in Applicaion -> system tools and labeling it "new login" is IMHO a really bad plan. No one will find it becasue no one will look there. When they don't see it beside logout in the desktop menu they will assume it is not supported and doesn't exist. What newb would think, "I want to log out but keep this sesion open so I'll look under System Tools"? This needs to be tweeked adn cleaned and inserted into a sane place with a sane title so people become aware of it.

CalumBenson: I guess things have improved a bit on this front in 2.14... "Switch User" is now available in some of the same places it is on Windows (on the Log Out dialog and on the locked screen dialog).

CalumBenson: While putting together the UI spec for the OpenSolaris desktop, I took the opportunity of reviewing all the .desktop file Comments, which appear as menu or launcher tooltips. Needless to say, despite HIG guidance on the subject, there wasn't much consistency and some of them weren't very descriptive. Here's my first pass at a suggested rewrite.

Vague guidelines I kept in mind while writing them:

WouterBolsterlee: the Preferences menu is HUGE. It has 23 items on my machine. I know flat hierarchies are A Good Thing, but some grouping would really improve the usability of the Preferences menu. Actually, we already use a submenu for the Accessibility settings. I would really like a decent categorization like "Look and Feel" for things like the gnome-font-properties, gnome-background-properties and gnome-ui-properties, "Peripherals" for things like keyboard, mouse and monitor settings. This definitely needs more thought, but the current situation is just Really Bad imho.

JoachimNoreiko: Good idea, though it should probably wait until the Administration/Preferences distinction can be removed.

PeterClifton: What about some visual grouping based on an item's sub-categories. This mockup was made as a counter to someone suggesting that we should use a tree of sub-menus for Electronics applications. It might not make sense to activate it with such a low number of menu items as in the mockup, but that's just the apps I had installed. 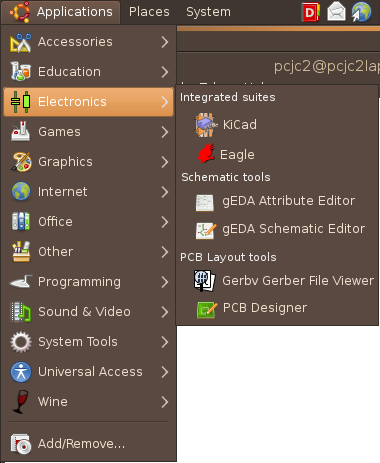 Note the subtly different colour (and smaller text size) for the group titles, combined with the indenting of contained apps.

It also worked out (in the preferences menu example) that each group ended up with icons with similar colour tones and visual appearance. That is probably no coincidence. Take for example, the "User and input" section - where all the settings "belong" directly to the person using the computer, their needs, and how they interact at the lowest level with the machine. Those icons (with the exception of SCIM - which is a bad icon anyway) all feature simple blue and grey tones. There are of course other examples in the menu which stick out like a sore thumb, and probably should have new icons, or be relegated out of the preferences menu.

There's an inconsistency with the use of the word 'online'. For the dictionary app, 'online' means 'on the internet'. For the Help menu item, it means 'on your computer'. Most people now understand 'online' to mean the first definition. -- Joachim

I remember from somewhere that while shutting down the computer there was a choice as "exit to windows", now I use debianLenny-gnome and I miss that.