Tweet has not been ported to Clutter 1.x, and TwitterGlib has not been kept up to speed with the changes in the Twitter RESTful API. Hence, I consider Tweet a dead project.

Tweet uses Clutter as an hardware accelerated canvas for parts of its user interface; this requires a working OpenGL implementation.

Twitter-GLib is installed system-wide with Tweet and can be used to build new applications interfacing with Twitter.

Tweet is developed on a git repository hosted on Github; the master tree is viewable here and can be cloned using

You can send me patches using git-format-patch or direct me to a tree I can pull from. 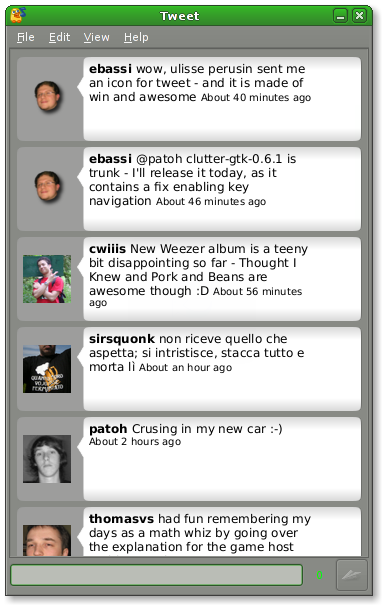 Tweet is released under the terms of the GNU General Public License, version 3 or (at your option) later.

Twitter-GLib is released under the terms of the GNU Lesser General Public License, version 2.1 or (at your option) later.