Scrollbars are used whenever some contents needs to be scrolled around. They will often be part of a ../GtkScrolledWindow, but do not need to. 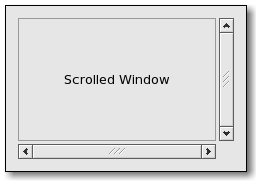 An exception here is probably trough-side-details which will not be interesting for scrollbars, but is very usefull for the ../GtkScale.

trough not under steppers

The drawing is basically the same thing as the one from ../GtkScale, with the difference that a scrollbar has stepper buttons.

The trough is a box with a detail of "trough" and a shadow of IN. The state is ACTIVE for normal scrollbars, and INSENSITIVE if the scrollbar is insensitive. For scrollbars trough-side-details and fill level drawing can also be set. They work in exactly the same way as the one from ../GtkScale.

If the scrollbar is insensitive, then the slider will be drawn with a state of INSENSITIVE.

The stepper buttons have a detail of hscrollbar or vscrollbar depening on the orientation. Other than that it is drawn similar to any other button. The main thing to note is that a stepper button will be drawn insenstive if the slider is at the top or bottom. The arrows drawn with the same detail string, state and shadow, and fill_arrow is set to TRUE. It will be displaced by the number of pixels specified in the arrow-displacement-? style properties if the stepper button is pressed.