../GtkScale is a slider control used to select numeric values. 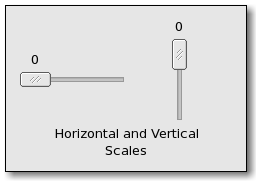 Also important are the style properties of GtkRange:

The trough-under-steppers style property is not used by ../GtkScale, as it does not have any steppers. 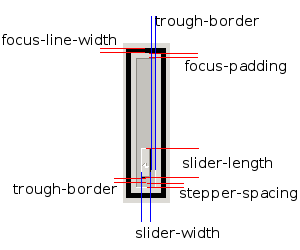 The stepper-spacing property does not have any effect any more from GTK+ 2.12 (?) onwards. It is only used if steppers are visible, and trough-under-steppers is set (for eg. ../GtkScrollbar).

The trough is a box drawn with shadow IN and its state either ACTIVE or INSENSITIVE. The detail string used is "trough".

From GTK+ 2.12 on there is support for fill levels. This can eg. be used by the application to show how much of a video has been downloaded. The fill level indication is drawn with a detail of "trough-fill-level" or "trough-fill-level-full" when everything is filled. The shadow is OUT and the state either ACTIVE or INSENSITIVE.

How the slider is drawn depends on different aspects. The detail is "hscale" or "vscale" depending on the orientation (should check if this got changed at some point). The slider is drawn INSENSITIVE if the widget is insensitive and PRELIGHT if the mouse is on top of the slider. Both of these states have a shadow of OUT. If the user drags the slider, the behaviour depends on the activate-slider style property. If it is not set, then the a dragged slider will be drawn the same as a prelighted one. However, if set the slider will be drawn with state ACTIVE and shadow IN to give the user feedback that the slider is being moved.

The focus is drawn with a detail of "trough".