Menus are used for most drop down lists. This usually includes comboboxes, etc. 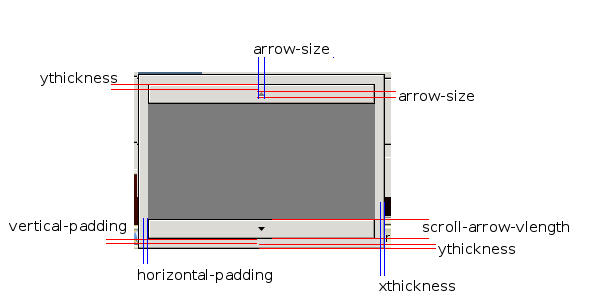 One thing to note is that the menu may have an additional border around itself which is not theme controlled. It is set via the border-width property of GtkContainer and defaults to 0 pixel.

How the offsets are used.

The menu background is drawn as a BOX with detail "menu" state NORMAL and shadow OUT.

The buttons for scrolling are also drawn with a detail of "menu" (WHY?), the shadow is OUT and the state is one of INSENSITIVE, NORMAL or PRELIGHT. Instead of the prelight state the ACTIVE state is used in touchscreen mode as then one needs to press the button (shadow stays OUT though WHY?). The arrow is drawn in the same state as the button. Though for some reason the details of the arrows are "menu_scroll_arrow_down" and "menu_scroll_arrow_up" (the _down and _up is kinda stupid IMHO ...)

In the past there has been a bug a bug where the horizontal-padding is not taken into account for submenu placement. (gnomebug:344290)