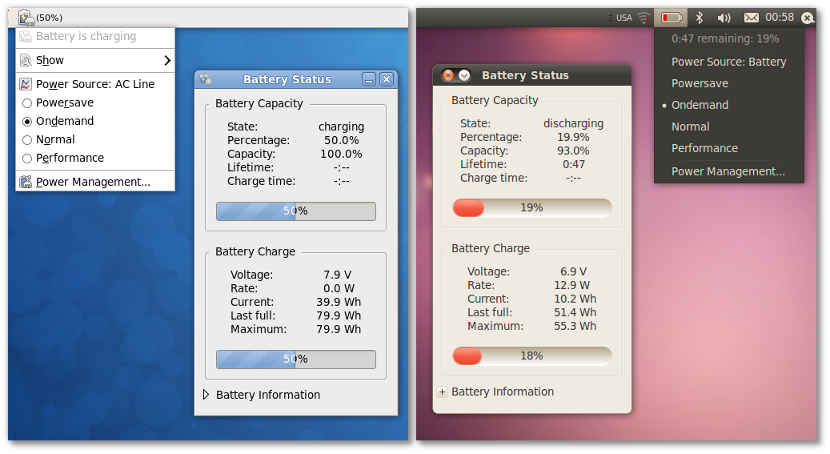 GNOME Power Manager's Notification Icon has got main user interface shortcoming (if its purpose - to show battery information) - for see exactly battery percentage or battery lifetime, user should hover mouse to icon, wait couple seconds, and only then user could see required information (tool tip - the bad way for getting information in such cases). Such behavior pretty annoying, so Battery Status' applet hasn't got such behavior and allow to user see percentage/lifetime/charge time of battery right in panel next to icon. Also, using GNOME Power Manager's Icon, user can't direct place, where exactly battery information should be showing.

Problems, which has been described above, can be solved by using battstat-applet (Battery Charge Monitor applet), but it has some historical architectural disadvantages (such as relies on ACPI and HAL) and user interface problems (such as using non-consistent icons) itself, and by these reasons this applet has been declared as obsolete, has been deprecated and removed from set of standard gnome-applets package in such key GNOME Desktop GNU/Linux distributions as Fedora and Ubuntu (see also this [1] discussion for more information) 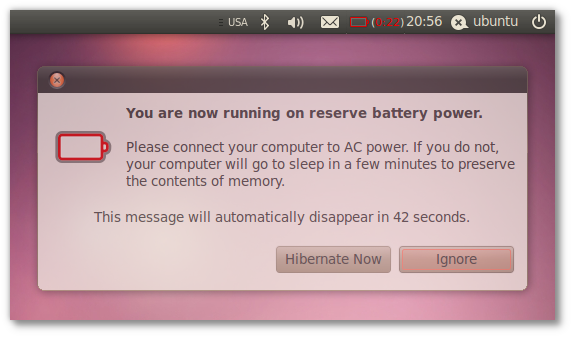 Another improvement - warning message about critical battery charge. GNOME Power Manager supports notifications (via notification-daemon/notify-osd), and this is very useful. But when user is deep in thoughts about his current work/task/action/etc, his locus of attention (see [2] for more details) may just couldn't see notification-like warning about critical low (which very important if user hasn't get access for power) - it should be message on top of all windows. 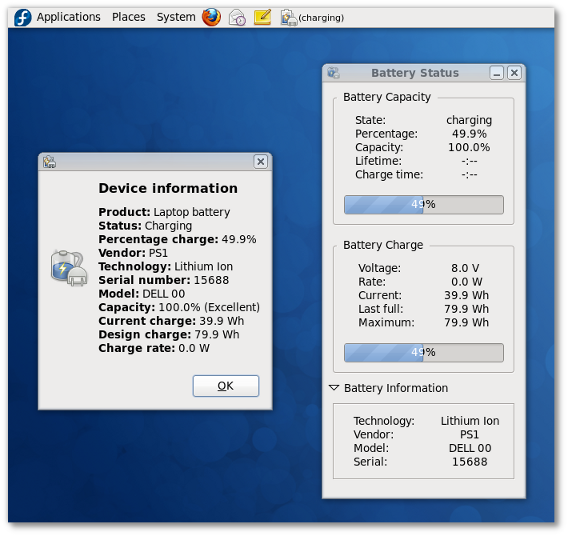 Battery Status can be installed from package, or from sources. For better experience you should re-login after installation.
Packages for Ubuntu can be found in this launchpad repository:
http://launchpad.net/~iaz/+archive/battery-status
Debian/Ubuntu-related source code tree (with debian/ directory for packaging):
https://code.edge.launchpad.net/~iaz/battery-status/trunk
non-Debian/Ubuntu source code tree (without debian/ directory):
http://github.com/ia/battery-status
Command for installation from sources:


Command for installation in Ubuntu from Launchpad's PPA:

For place applet to panel, right click on it, and select "Add to Panel..." > "Battery Applet"
After adding, by default applet shows icon only.
From main menu user (by default) can get access to:


From context menu (by clicking right mouse button at applet) user can get access to:

For run "Battery Status" as Application Indicator (in latest versions of Ubuntu, for example), run in Terminal:

For autostart this command on login, you can add it in "System" > "Preferences" > "Startup Applications".

Battery Status uses GConf for settings. All keys can be found in /apps/battery_status.
Description for each key you can find using gconf-editor.

If you are interested in Power Management, you've probably heard of Matthew Garrett and saw his presentations about Power Management [3]. According to common sense, such feature as "CPU frequency scaling" is not effective and productive from point of power management's view, but this feature has been supported in Battery Status, because some users still keep using it. However, I think that this part of Battery Status should be improved somehow (more flexible power profiles, maybe?).

I'm sorry for not doing this as a part of GNOME Power Manager, but I don't know C well enough for such kind of development as applets. Also I don't have plans yet for trying to push Battery Status in gnome-applets - my project is still pretty unstable and buggy for this.


It may sounds strange, but this project has been started a much earlier, than these discussions has been published:
http://chrisjohnston.org/2010/no-more-battery-status-tooltip-in-lucid
http://design.canonical.com/2010/04/battery
http://wiki.ubuntu.com/BatteryStatusMenu


Reviews from WebUpd8 (thank you, guys!): 1 2
Review from OMG!UBUNTU!: How to add a detailed battery indicator to Ubuntu


Also, I can't wait for fixing of this bug - #541858
so indicator could display battery time/percentage right in panel as applet does.