Frogr is a small application for the GNOME desktop that allows users to manage their accounts in the Flickr image hosting website. It supports all the basic Flickr features, including uploading pictures, adding descriptions, setting tags and managing sets and groups pools.

This project is Free Software and published under the terms of the GNU General Public License v3. 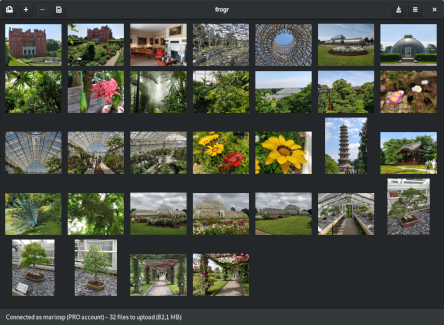 For more details on the features of Frogr, both in the stable releases or the unstable branch (master), check the NEWS file.

The latest stable version of Frogr is 1.6.

In case you could not find a package ready to use with your favourite distro, you can always get Frogr's source code from the source tarballs, or just by cloning its git repository:

Building from the source tarballs is nice, but sometimes is more convenient to get apps installed through other ways, so this section explains how to get frogr installed in some of the most common distros out there:

Flatpak is a new way of distributing applications on Linux so that the same bundle can be installed in different distributions, even different versions at the same time. Frogr has been adapted to support flatpak so, assuming that you have a recent enough version of flatpak (0.6.13 or later), you can easily install the latest stable version easily by running a single command:

Or, for the unstable nightly builds:

Once installed for the first time, you can easily update it later on with:

Note that, to be able to authenticate your account, you'll need to have installed the portal frontend service for Flatpak as well as a backend implementation (such as the one for GTK+), so that it's possible for Frogr to open URIs in applications outside its sandbox (e.g. using the browser for authentication, open an image in the viewer). Fortunately, this are currently shipped with Debian/Ubuntu/Fedora and others, so you can easily install them as any other packages in your system:

Frogr is packaged in Debian since Wheeze, as well as in Ubuntu since Oneiric, so you should be able to install it in those distros (or newer) by simply doing, as root:

For the specific case of Fedora, frogr is packaged since Fedora 15 (Lovelock), so you should be able to install it by just doing:

Frogr is also being packaged already for OpenSuse, but if you want to install it in previous releases, you can always use the binaries in the OpenSUSE packages build through the openSuse Build Service, in the context of the 'GNOME Applications' subproject.

If you use ArchLinux you can get the PKGBUILD file directly from here (thanks uastasi!)

For Mac OS X, there's an older version of Frogr packaged for Intel architectures that you can download from the GNOME FTP server. This is no longer officially supported and has been completely deprecated (meaning that no more releases are expected), so there's a chance that it no longer works, specially in newer versions of OS X. Use at your own risk.

It is available at: https://discourse.gnome.org/c/applications